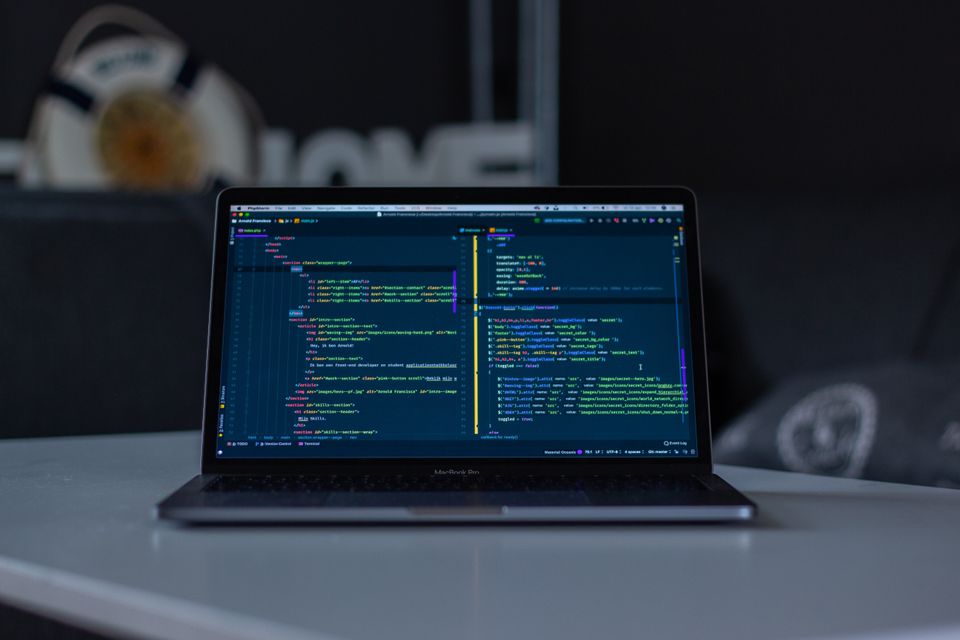 Angular is one of the most popular frameworks used for building web applications with JavaScript. If you are new to Angular, you may be confused as to what Angular and AngularJS are and what are the differences between them.

If that’s the case, then you’re in the right spot. Because that’s what we’ll be looking at in this article.

What are Angular and AngularJS?

On the 20th of October 2010, Google released an open-source front-end web framework based on JavaScript. The new framework was named AngularJS, and it quickly rose to popularity due to its ability to extend HTML through directives and build single-page web applications.

However, as AngularJS aged, it couldn’t support the increasing demands of web developers anymore. Especially after the arrival of React and Vue, AngularJS faced tough competition. Google decided to do a complete overhaul of AngularJS with version 2 and decided to switch to Typescript, instead of JavaScript.

TypeScript is a Superset of ES6 that forms JavaScript. Google chose TypeScript to overcome the pitfalls of JavaScript and introduce some features such as static typing, which were in demand by developers at that time.

All AngularJS versions released after version 1 (AngularJS) are generalized as Angular. So which version you should learn and use in your projects will depend on the features that your project requires.

AngularJS uses the MVC model, which separates an application into three logical units called Model, View, and Controller. While the Model is responsible for all data related logic, View is responsible for the UI logic of the application. The controller acts as an interface between Model and View. It receives user requests, processes business logic with the help of Model data, and then interacts with View to render the final output.

An Angular Component is a directive-with-a-template; in other words, it is a Directive extended with template related features. So, Components are technically Directives. However, there are also other types, such as structural, attribute, and Custom Directives. 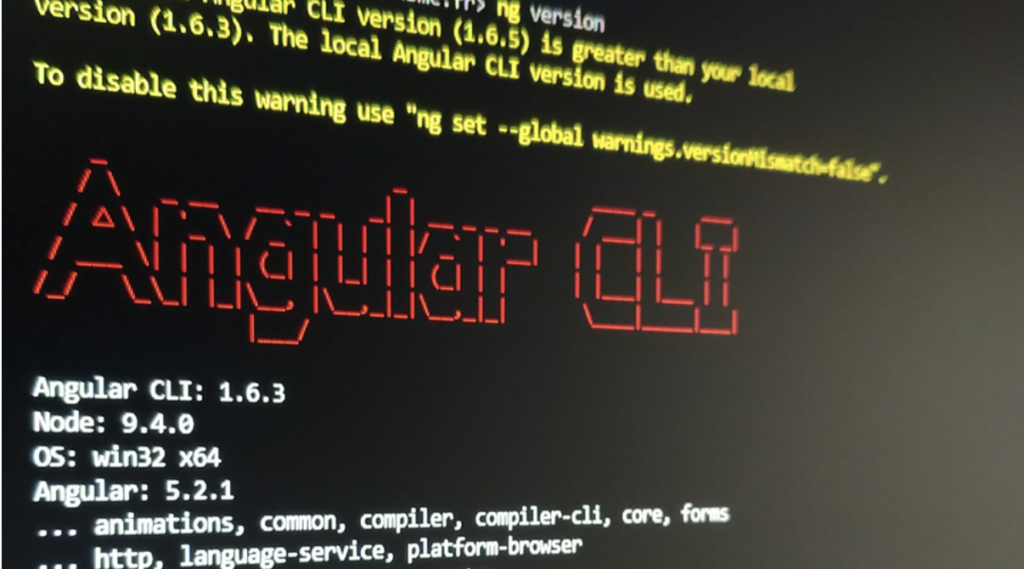 One of the key components that were added to Angular is the Angular CLI, which has greatly helped speed up the development process. You can use it for creating new projects, setting up boilerplates, building components, and much more.

These are some of the most commonly used Angular commands for creating a new project, generating a component or service, and starting a test server:
ng new my-project
ng generate component PersonComponent
ng generate service PersonService
ng serve

AngularJS requires developers to memorize many predefined commands to perform actions such as binding. For example, ng-model can be used to create a two-way binding, while ng-bind can be used for its one-way counterpart.

In Angular, these actions are simplified. The ngModel command is a single command used for all these purposes. One-way and two-way event binding can be performed with “()” and “[()]” respectively. Property binding can be done using “[ ]”.

The prevalence of mobile applications amplified the inability of AngularJS to support Mobile app development. This changed with Angular as native app support was included. In fact, the Angular website boldly states “One framework. Mobile and desktop.” This shows the importance given to mobile development in the later versions of Angular.

Routing is an important feature that allows navigating to pages with varying content based on the URL. This is especially important for Single Page Applications (SPA). AngularJS came with built-in routing, however, Angular simplified the code required to maintain complex routing and introduced features such as Router Lifecycle Events and support for ParamMap.

Testing and writing unit tests are generally difficult in Angular, irrespective of the version. The reason for this is that unit tests require a DOM to be executed in. The solution to this to opt for third party testing tools like Protractor, which is an end-to-end testing tool. However, the resulting tests become more like UI tests or integration tests, and these are slower to execute and harder to maintain.

In contrast, Angular has a separate rendering layer, and components are independent. These improvements result in unit tests being executed much faster and having better maintainability.

Unidirectional data flow and hierarchical dependency injection have uplifted the performance of Angular. In contrast, AngularJS uses two-way binding, which is popular among web developers for creating smaller applications. But as applications increase in size and complexity, two-way binding can cause infinite checking, which greatly affects the application’s performance.

AngularJS was already quite innovative with its approach for dependency injection when building modular applications. However, there were some issues that could not be fixed without a complete code restructuring.

One such case which becomes problematic when building relatively complex applications is that AngularJS has a global pool of objects per application. This means that developers are not able to load multiple instances of components like services. If they do, the subsequent instances would override the initial one.

The situation is similar for modules with the same name. AngularJS would silently override them. Both of these concepts become useful in a handful of cases, like replacing modules with mock modules for testing but result in many other restrictions.

Angular JS also provides many ways of injecting dependencies like in link function by position, in the directive definition by name, and in the controller function by name. While these methods provide more flexibility, they also result in a steeper learning curve.

One of the few disadvantages of Single Page Applications (SPA) is the lack of support for SEO due to the content being rendered on the client-side dynamically. Angular solves this by providing the ability to render content at the server-side and serve static HTML content to the client-side.

Server-side rendering greatly benefits SEO friendliness. Search Engine crawlers love static content, mainly because they don’t execute JavaScript. The Google crawlers are said to be able to execute JavaScript as of 2018, however, it is always better to serve pre-rendered static content considering the other SEs. In addition, it can also benefit applications by increasing performance. Faster loading pages are great for SEO.

Shadow DOM is a browser mechanism that allows creating components that look native. For example, a custom select (drop-down) component. Being able to support the Shadow DOM is a major benefit of Angular.

However, only some browsers like Chrome have implemented it. Angular allows emulating this feature on other browsers by prefixing the CSS inside components on the fly. It also allows applications to run in default mode, which means that the Shadow DOM is not active.

Advantages of Angular over AngularJS

Disadvantages of Angular over AngularJS

In conclusion, we can state that AngularJS is better for smaller web applications and Angular for large enterprise-like ones. You will need to try out both of these frameworks before deciding which one is better for your particular application. Being familiar with both is an advantage for sure.

Ultimately, it all comes down to the importance of features and the support available in terms of templates and third-party components. For a head start, you can try out some of the  UI kits, templates and dashboards from Creative Tim. These themes will allow you to create elegant applications irrespective of whether you choose AngularJS or Angular. 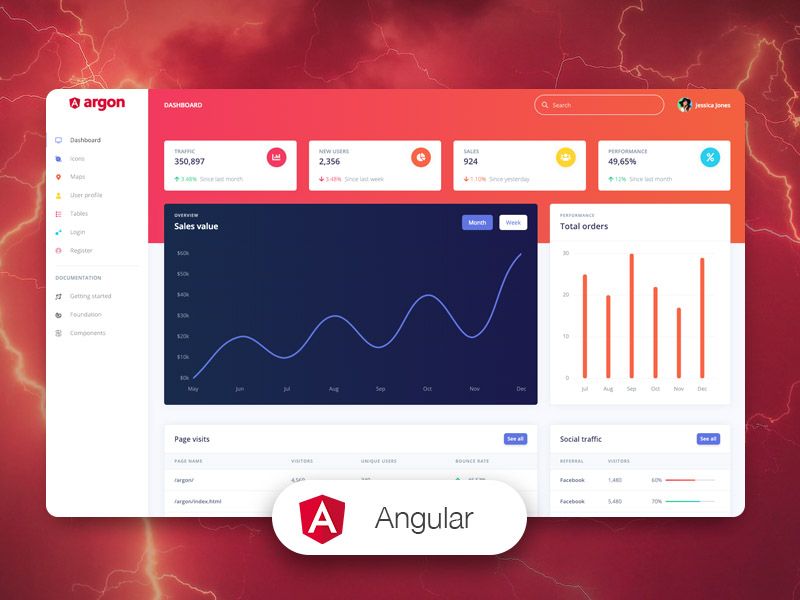 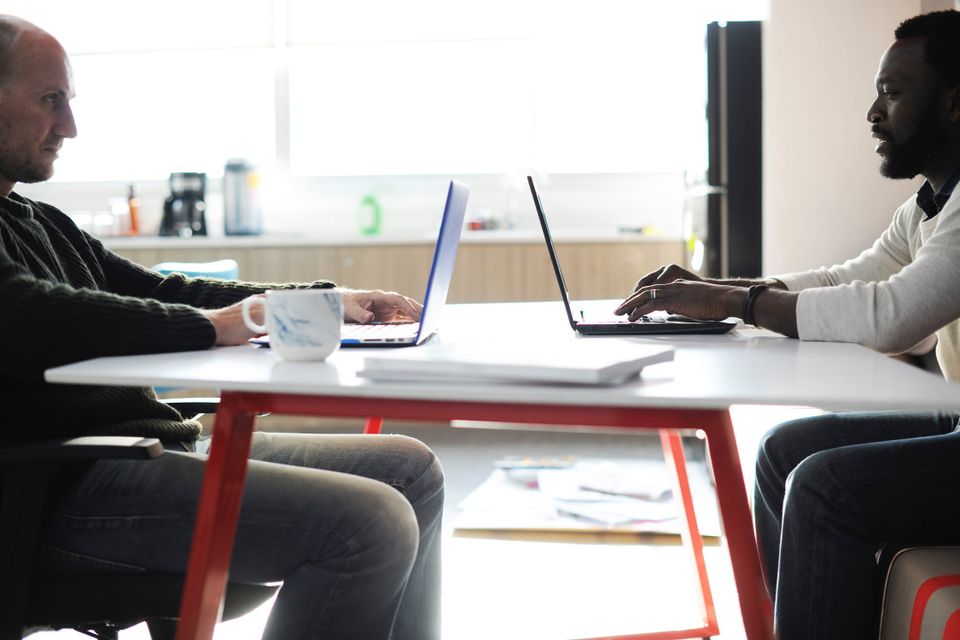 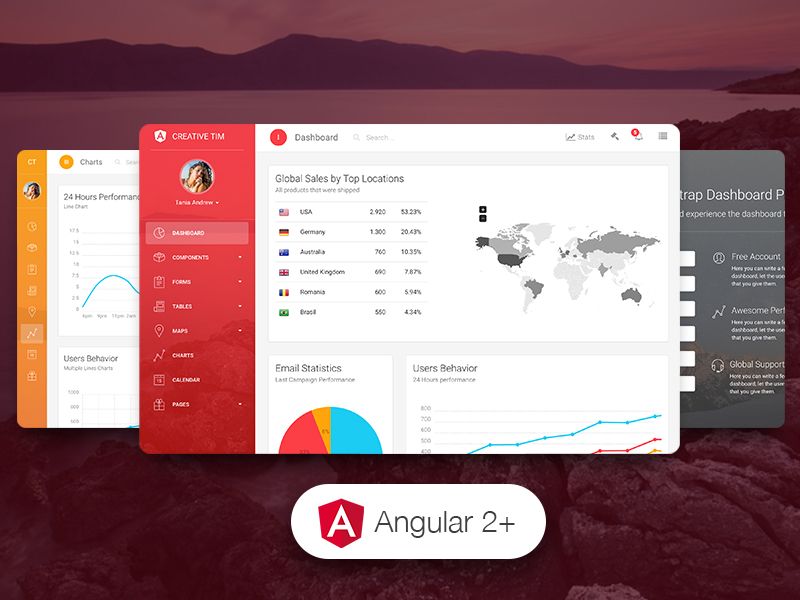