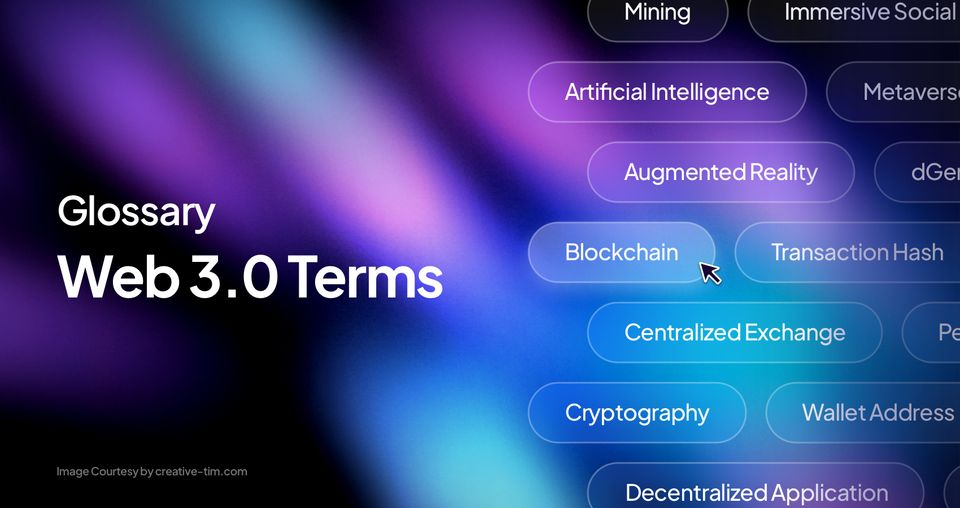 While Web 3 is taking the world over by a storm, you might still be having some trouble wrapping your head around the terms being thrown around. It can be hard to keep up to date with all the new terms being introduced daily, so here is a list of Web 3.0 terminology that can help you understand this new phenomenon better.

The history of the web started back in 1989 (Web 3.0 release date - 6th August 1991) when Tim Berners Lee conceptualized the idea of a page in a directory that can reference other pages by making use of hyperlinks. The earliest form of the web, which allowed creators to create content while consumers could only read it, was termed Web 1.0.

The linearity of Web 1.0, and the limited ability to simply read information without any interactivity led to the rise of Web 2.0. Web 2.0 allows users to both consume and create content, give feedback to content producers, and provides an interactive way to share information.

While Web 2.0 has a lot of benefits over the drawbacks of Web 1.0, it is still becoming slowly obsolete because of its dependency on the Big Tech companies (like Alphabet, Meta, Twitter, and Apple). Since all data is being stored, used, censored, and secured by the Big Tech companies, the concept of autonomy has given rise to Web 3.0.

In other words, Web 3.0 in simple terms is the new iteration of the web which uses natural language processing, decentralized autonomous bodies, blockchain technology, and 3D graphics. Since information can be accessed from all ends of the web spectrum, the web becomes permissionless, and there is a reduced dependency on Big Tech. Web 3.0 is hence the next big thing that is expected to revolutionize how the web works.

An overview of Web 3.0 is simply not enough to understand the complexities, ins and outs of Web 3.0. Here is a glossary of 25 terms that can help you understand Web 3.0 with ease.

The technology that uses glasses, visors, smartphones, and goggles to superimpose the experience of a real-world environment in a computerized environment. It often includes visual, haptic, somatosensory, olfactory, and auditory experiences to achieve 3D modeling, intelligent interaction, sensing, tracking, and registration. In other words, AR presents virtual objects in the human field of vision.

A block is a place in a blockchain that stores and encrypts information. It can be identified by long numbers that consist of the version number, the hash of the previous block, and the information about the new transaction. In blockchain technology, blocks can only be created once the information within them is verified by a network.

A growing list of blocks that are linked together using cryptography. Blockchains are managed by peer-to-peer networks, stored in a distributed ledger, and follow a protocol that verifies and validates new blocks. Blockchains are secure by design since the data recorded in each block cannot be altered without altering all the blocks that follow it. Bitcoin and Ethereum are popular blockchain examples.

Find out more information about what blockchain is.

Third-party cryptocurrency exchanges that allow users to buy or sell cryptocurrency. They are usually operated and controlled by a company and are hence user-friendly and reliable. Some examples include Coinbase, GDAX, Kraken, and Gemini.

Practice in the cryptocurrency sphere where users can get loans and interest from their digital assets such as Bitcoin, Ethereum, USDT, USDC, etc. The transactions are carried out by a centralized platform that is either managed by a person, a group of people, or usually a financial technology company. It hence means that users need to place their trust in the organization that runs the platform.

A set of secure communication practices that limits the data shared across a network to be seen only by the sender and receiver. The data is usually converted into formats that cannot be recognized by unauthorized users. A simple example is an encrypted message that replaces letters with other characters that only the sender and receiver can understand.

A coin is a cryptocurrency or digital cash that does not depend on any other blockchain or platform. In other words, coins are not used to serve functions such as representing the number of votes in a certain poll but instead act like a native currency in its financial system. Coins are used as a medium of exchange and store a specific economic value just like a normal physical currency. Transactions in cryptocurrency are secured using cryptography. Bitcoin, Ethereum, Tether, Binance, etc are examples of coins.

An emerging concept of Web 3.0 that does not have a central governing body. All members in a DAO have a flat structure and share a common goal of acting in the best interest of the entire entity. All votes and activity of DAOs are stored in a blockchain, by verifying it in a peer-to-peer network, hence making it possible to make automated decisions that are publicly available. Examples include DASH, a cryptocurrency managed by its users, and Augur, a prediction market platform.

A distributed open-source software application that does not work on a single computer but instead works on a peer-to-peer blockchain network. Visibly they are similar to other applications that are available in Web 2.0 but are free from the control of a single authority. In other words, once the codebase of these applications is released, other people can build on top of it. BitTorrent, Popcorn Time, and Tor are examples of Dapps that are a part of a peer-to-peer network.

A system that operates without the presence of a middle or third party. Decentralized systems replace a central authority with a distributed peer-to-peer network.

A financial system built on the principles of blockchain technology. Defi is borderless, trustless, and built on top of public blockchains without the use of middlemen like banks. Defi systems are open and interconnected, and allow users to connect without a central server. Anyone on the internet can use it and can combine it with other services. Defi use cases include asset management, DAOs, data analytics, digital identities, and compliance.

A peer-to-peer cryptocurrency exchange built on the blockchain. DEXs are marketplaces where buyers and sellers can trade cryptocurrency without handing over the funds to an intermediary like a bank. They depend on smart contracts to execute orders and allow direct trading from the trader's wallets. The downside is that traders have to guard their funds on their own and are accountable if they send funds to the wrong addresses. Uniswap, PancakeSwap, Bancor, etc. are examples of DEXs.

The generation of people whose careers and lives revolve around Web 3.0. They can be Web 3.0 developers, gamers, or simply virtual reality users.

A ledger of cryptocurrency transactions. Also called a shared ledger or distributed ledger it is a synchronized ledger of digital data of geographically spread sites or countries. There is no central administrator to control the data, and a peer-to-peer network and consensus algorithms are used to ensure that the data is replicated across all nodes present in the network. A blockchain system is an example of a distributed ledger.

A distributed and decentralized, peer-to-peer protocol and network to share files, websites, applications, and data. It is modeled on top of BitTorrent, but instead of locating web resources using URLs, it uses content-based addressing and routing to find out a web resource.

An emerging field of social media technology that enables users to create, share and comment on social media posts in 3D environments. Immersive social uses the combination of 3D and AR technologies. It does not require VR headsets but can directly be experienced using a browser on the web. The emerging examples of immersive social websites are display.land, Mozilla Hubs, and Google Poly.

An integrated network of 3D virtual worlds that can be accessed using a virtual reality headset. It allows users to feel the physical sensation of actually being in a place from a remote location. While it started as an emerging technology for gaming, its use has seeped into music, sports, online learning, and government services technology. It is expected that the metaverse will be like the real world where users can trade stuff and explore places using personalized avatars. Second Life, Fortnite, Roblox, and Horizon are some examples of the metaverse.

The process of adding new cryptocurrency coins into circulation. This is done by peer-to-peer nodes which validate transactions occurring in a crypto network. The validation takes place based on an agreed upon protocol whereby individual miners solve cryptographic problems and get cryptocurrency coins as a reward for doing so. For example, in the Bitcoin network, miners mine a block of transactions, and get awarded 6.25 Bitcoins in addition to the transaction fees.

A connection point in a networking environment that receives or sends data from one point to another. Nodes can be routers, printers, switches, or servers. Nodes are programmed or engineered to recognize the data they receive, process the data as required, and direct the data to the next required node in the network.

A network that considers all of its nodes to be equal. In other words, there is no notion of clients and servers and, unlike the client-server network model, communication is from each node to another. The tasks, storage, processing power, network bandwidth, and other resources are equally shared between the nodes, and each node is both the supplier and consumer of resources.

A unique string of letters and numbers that identifies a transaction in a blockchain network. It is essentially a record or proof that a transaction has taken place. It can be used to track the details of a transaction but itself does not contain any personal information.

A unique string of letters and numbers which represents your cryptocurrency wallet. Other users can send cryptocurrency to your wallet using this address.

Programs (pieces of code) that are stored on the blockchain and are activated when certain pre-defined conditions are met (like the click of a button, or more complex actions). When a smart contract is executed, it will perform an operation, like buying NFTs, transfer of funds, transfer of ownership, buying land in the metaverse, and so on.

A detailed description of your Web 3 project that is created for users and investors to help them decide whether to fund or adopt your service.

Protocols are, as the name suggest, a set of rules that allow data to be shared between computers. These rules also allow cryptocurrencies to be decentralized via the blockchain.

The Web 3.0 world is a huge, unexplored, and emerging concept that is yet to fully take shape in the years to come. It hence is important to understand and stay on top of terms and technologies that will form the base of Web 3.0 in the future. 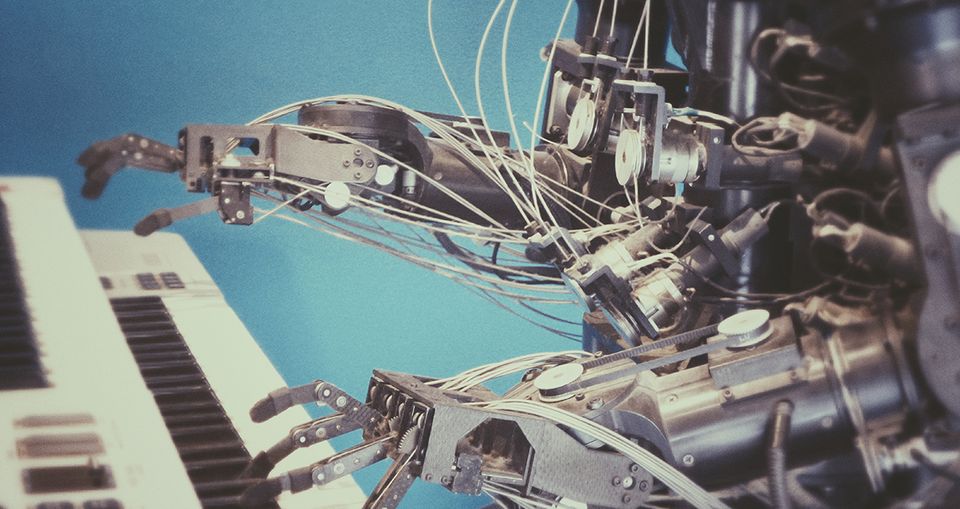 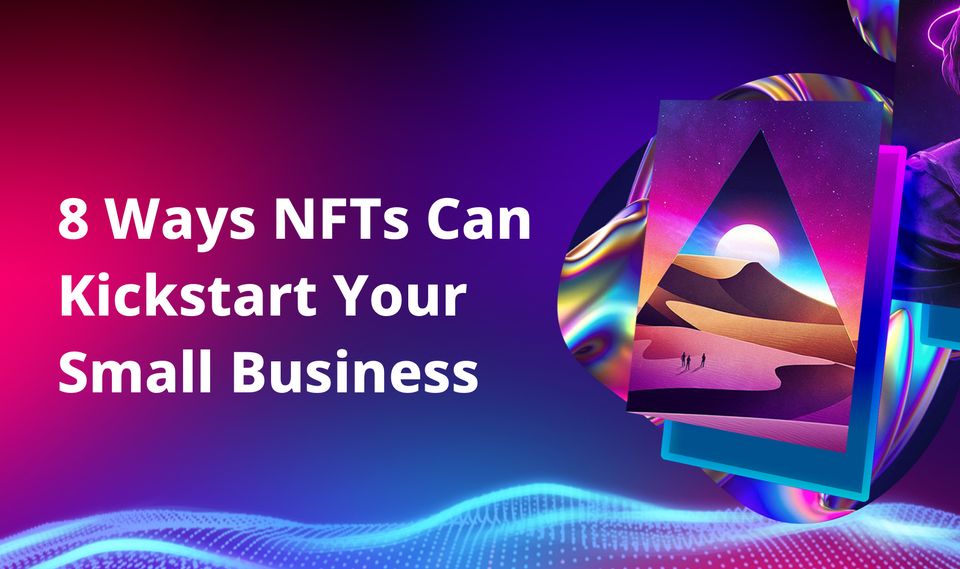